Getting High In Auckland

If there’s one thing you need to know about me, if you don’t already, it’s that I like to get high.

Wherever and whenever possible I seek out the highest point(s) in a city and make it my mission to get to the top. Most of the time I’m successful, except for that one time I tried to go up the SkyTree in Tokyo only to be told that it was too windy but I still made my way to another observation deck elsewhere in the city. Every time though, it’s worth the trip.

Auckland was do different.

The central tower in the city skyline is the Sky Tower. It’s the tallest man-made structure in the Southern Hemisphere standing at 1,076ft (328m) tall. The tower itself is a part of the SKYCITY Casino down closer to the ground. But for those looking for less of a gamble and more adrenaline, look up.

The SkyJump, at 192m, is a thrilling base jump experience unlike anything else. Similar to my Bloukrans bungy experience, I can say that the ride up was probably the worst part. I was put into an elevator and as I looked around I saw a square cut out of the floor and that square was filled with glass or plastic so that as the elevator climbed I could see the ground floor. The once bright white light that shone through became a dim afterthought once I was at the top.

When it was finally my turn to step onto the platform and jump I made the mistake of looking down. Big mistake, huge. I gripped the side railing like it was my lifeline as I inched out to the ledge. As I was being strapped and buckled in I looked down and saw a giant mat with a target printed on it at the bottom. That wasn’t much better…

To take the edge off I began to chat with the instructor. I asked her about local landmarks, the Auckland Harbour and what I should do/see next. She pointed out a few things to me and then she said that it was time to jump.

She then explained to me that as soon as I jumped I would be stopped and I would need to look up and give a thumbs up, because they were going to take another photo of me dangling above the city…charming…but exhilarating. 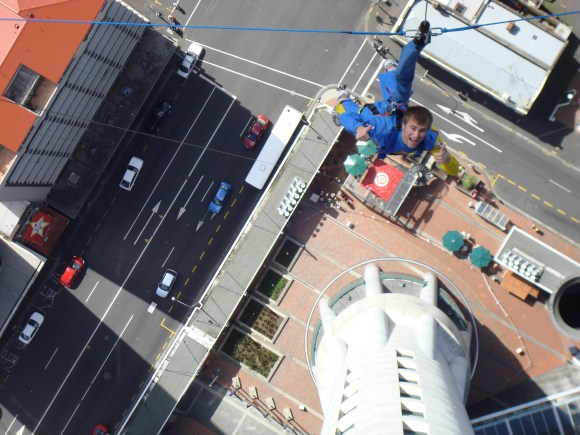 Then came the descent.

Falling at speeds upwards of 85kph (52mph), the buildings grew around me and the once distant sounds of the city enveloped me once again as I landed on the mat. The instructor at the bottom unhooked me and said “We have some time before our next group arrives, would you like to go again for free?”